New Feature! My home and the pain I endure to improve it. The blog was feeling a bit neglected since I’m not traveling at the moment so I’ve decided to branch out.

I bought my home about twelve years ago. It’s a cute little three-bedroom, one-bath abode that was built around 1905. 100-year-old houses, like 100-year old humans, sometimes show their age. They creak and groan, they complain about being too hot or too cold, and sometimes they leak. But we love them anyway, right? Luckily, with a little TLC and some elbow grease, these old timers can be beautiful again. I’ve always had this weird belief that inanimate objects appreciate kindness and will return it to the owner, like when you wash and vacuum your car and could swear that it runs better. Could be just me.

On to the current project. For a while now I’ve been trying to decide what to do with the floor of my eat-in kitchen. It had that typical 90s-era yellowing vinyl flooring that was well past its prime. Having all but decided to be lazy and slap sticky tiles over top of the whole mess and call it a day, a conversation with my friend Amy got me thinking about a different approach. Years ago my parents painted the laundry room floor in their old house and it turned out nicely. Decision made: every bit of the old flooring would have to come out.

With a renewed sense of excitement I started pulling up the old vinyl, which was barely held down with adhesive. No sweat… I’ll be done by lunchtime. Ha! This is an old house, dummy; there are no easy projects! I knew the vinyl was glued to 1/4″ luan, but what I didn’t anticipate what that the luan was affixed to the floor with nails every six inches. The room is 8′ x 14′. That’s over 500 nails. I wouldn’t be done by lunchtime.

Luan likes to explode if you put any force on it with a crow bar so I adopted a technique of working down an edge and inching further in, until you eventually can’t go any further and have to snap it. At some point my brain decided to participate and I realized it would be cleaner if I scored the piece with a circular saw at the snap line. To pop larger pieces loose I used a shovel as a lever. So now I had a system and everything was groovy until… wait, what’s that? Another layer of vinyl tile glued to the original wood floor? 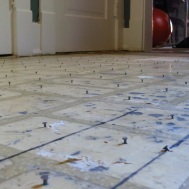 Whoever glued down the original vinyl intended for it to survive Armageddon. I’ve scraped it, soaked it, pleaded with it, swore at it, and eventually took a heat gun to it, which has been the only successful approach. The paper lining underneath the vinyl almost certainly contains asbestos so I’ll be wearing a respirator but will forego the full-on hazmat suit and plastic lining. At this point I have all of the luan removed, along with those damn nails (if you don’t get them with the crowbar you will certainly find them with your bare feet). I’ve discovered a few more surprises where old vent registers were filled in with blanks that I’ll have to deal with. Hopefully piecing in those sections with similar wood will suffice since it only has to be paint quality.

Is all of this worth it? Maybe not, but I’m never content to “put lipstick on a pig”, as they say. When I finish a project I need to feel that I gave it my best effort. I just hope it turns out as well as I expect!