Currency in a foreign land 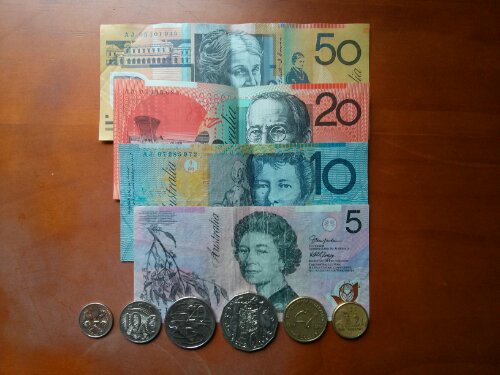 Money, scratch, dinero, coin, cash, moolah. Money doesn’t buy happiness but it does buy a cab ride or a falafel from a street vendor. Sure, credit cards are pretty much accepted eveywhere these days but cash is still king, which is why one of the first things you should become comfortable with in another country is their currency.

Six days ago I landed in Australia- the first time I had ever been on foreign soil (except for a trip to the Bahamas which doesn’t count). I went to the magic money machine at the airport (don’t do this, just use an ATM in the city), stuck in $200 US dollars and received A$161.80 in return. 😦 Of course I hadn’t researched Australian currency one bit so all of the sudden I had a bunch of colored pieces of paper and weird coins that felt about as useful to me as Monopoly money. It was intimidating but I found that you get the hang of it pretty quickly and cashiers will help you out even if they think you’re stupid.

Check out the pic above. The first thing I noticed is that Australian paper money comes in different sizes, getting smaller as the denomination decreases. I can only assume their A$100 is bigger than the A$50. There’s also a little transparent section on each bill which is kind of cool. Ok, so no big deal with the paper money. Where you can get in trouble is with the coins. See that little goldish one on the far right? That’s a A$2 coin and next to it is a A$1. In the US if you have a pocket full of change you might have, at best, three bucks or so (yeah we have $1 coins but when was the last time you used one?). Over here you could have A$20 in your pocket! Why their second smallest coin carries the most worth is a mystery to me.

So anyway, it doesn’t take long to get used to it. I guess the lesson is that in Australia you need to be more mindful of the little change in your pocket goin’ jing-a-ling-a-ling.

8 thoughts on “Currency in a foreign land”