The wifi connection with my current HelpX host seems a bit flaky and I only have 100 MB left on my cellphone data plan so I probably won’t be updating much in the next few days.

I spent four days in Melbourne being a tourist and punching bag and am now way out in the middle of nowhere at a native plant nursery in Victoria, about two hours east of Melbourne. I’m only here until Sunday, when I’m supposed to join a family who run a winery about an hour north.

I don’t know why anyone would make their living in this area based on a product that needs a lot of water because everything is dry and brown. Apparently they recently came out of a 10-year drought. This house is completely off the grid with solar for electricity and a 55,000 liter container of water for all bathing, cooking, etc., which is 100% rainwater (filtered, I guess?).

It has me thinking about how feasible some of these ideas might be in the states but I don’t think the financial benefit is enough to drive it. Simon, my current host, told me that he and his wife used to pay $1000 for three months of electricity, and his solar setup cost $7000. In the states my electric bill would be $450 over three months in the hottest part of summer. Electricity is generated from coal here and there’s tons of it, but the power companies just gouge their customers.

Simon has 50 acres and I get the impression that he’s kind of a big kid. He has a winding, one-car-width dirt road all around his property that’s intended to help with fire control in the bush but mainly gets used as his personal racetrack. He took me for a lap in his 1981 Toyota Celica, which he flogged the hell out of. I’m hoping to get a chance behind the wheel before I leave!

I have lots of pictures to share from the end of my stay in Bellingen and some from downtown Melbourne but those will have to wait until I get a speedier connection. For now, text will have to do!

A little edit to my original post… This is a Google maps aerial view of where I’m staying. Most of the path that you can see is the “racetrack”. 🙂 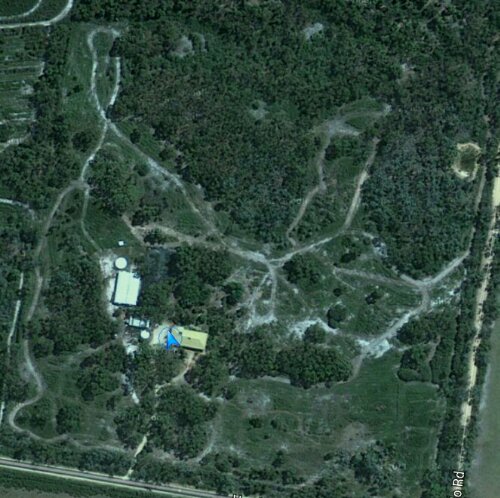