Auckland: The City of Sails 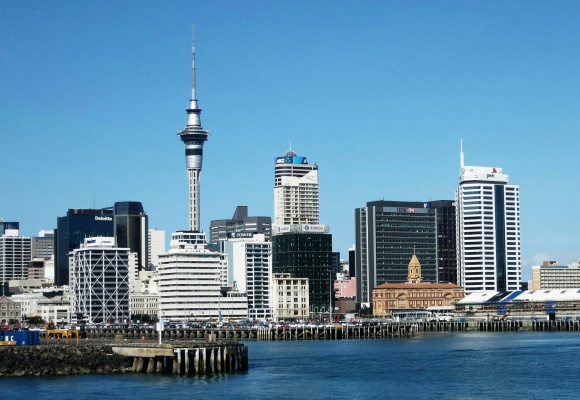 Has a nice ring to it, wouldn’t you say? I like this city. I can’t really put my finger on why but it just appeals to me. Even though Auckland is the largest city in New Zealand and its 1.4 million residents make up 32 percent of the country’s population it doesn’t feel that big.

My flight arrived later than scheduled on Tuesday and it always takes a while (for me) to figure out a city’s public transportation system so it was almost 9:00 PM when I made it to my Airbnb host. Jody’s a massage therapist and is spiritual and funky, in a good way. She’s also extremely generous and had salmon and veggie leftovers waiting for me in the oven. Have I mentioned that we’re complete strangers? Pretty awesome. She has tons of knowledge about the city and has given me some great ideas.

I like cities that are walkable and bikeable and Auckland fits the bill. One of the first things I do in a new city is find a bicycle shop. My goal is to ask about rentals, which most shops don’t do, but even so the employees are usually cool and will recommend another shop or give me the scoop on how bike-friendly a city is. I had no luck on the rental front Tuesday so I just put it into Two Heel Drive (2HD).

I tend to sort of wander around when I’m exploring a new city. I use the hell out of Google maps on my phone and I like to find big splotches of green (usually some kind of park) and head that direction. I did that my last day in Melbourne and stumbled across a nice city park where people were doing group bootcamp workouts, jogging, etc. I just laid in the grass and read a book for about an hour, though I started to feel like a slacker so I busted out a few sets of push-ups. I hope those bootcampers were watching.

Anyway, back to Auckland. I walked for awhile and came across this beautiful little place called Albert Park right in the heart of the city. It was lunchtime and people were sitting around chatting, enjoying the sun. Off in the distance I heard what sounded like a drummer doing a sound check and his beats were so funky I couldn’t resist checking it out. As it so happens it was a sound check and I found myself standing in the middle of the Auckland University quad. The student union was having an event to celebrate the start of a new term and there would be free music from 2:00 to 7:00. Sweet! I was wearing a backpack so I just pretended to be a student… I made use of the restrooms, bought a hotdog for $1, listened to some music, even walked into the rec area and charged up my phone. 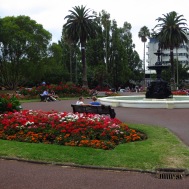 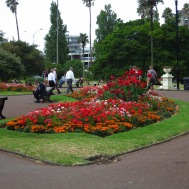 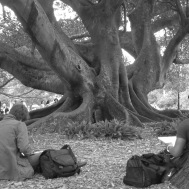 Afterwards I strolled to the Auckland Art Gallery. In art galleries I tend to gravitate toward modern works or stuff by local and/or indigenous artists. The Maori people do some amazing work with facial tattoos and wood carvings with a level of detail that blew me away (sorry, no pics!). There’s an event this weekend that should give me a much better feel for Maori culture. Stay tuned! 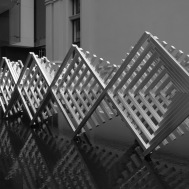 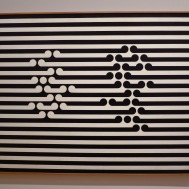 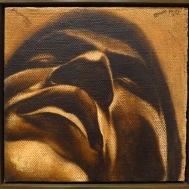 I kicked off Thursday by hopping on a bus toward downtown, where I purchased my north island tour from Stray, booked a one-night stay in a hostel, and rented a bike from Adventure Capital. The bike is pretty decent and the fee includes bike, helmet, and a lock. It’s an Avanti-branded mountain bike with older components but it’s comfortable and seems reliable. I then rode to the port and bought a ferry ticket over to Waiheke Island.

Waiheke, population 9000, is an island northeast of Auckland. It’s home to many beaches, coves, wineries, and little shops. I didn’t have a solid plan other than see as much as I could by bike and hop back on the ferry when I wore myself out. I ended up going in a big clockwise loop along the northern and southern coasts as I mainly wanted to see beaches and awesome ocean views.

At one spot I could see people on the sand from an upper vantage point but couldn’t figure out how to get down there. After a couple failed attempts I found a dirt path that took me to the beach and got a lot more than I bargained for. I noticed quite a few people were, as we say back home, Buck Naked. Not just topless, we’re talkin’ the full monty. No shame with these folks as they lounged around in their birthday suits. Walking down the beach the dialogue in my head went something like “Look at the sand. Look at the ocean. Be casual. Whatever you do, don’t look at the group of seven men sunbathing to your right.” Like the little hobbit Bilbo Baggins, I too had an unexpected journey in New Zealand. 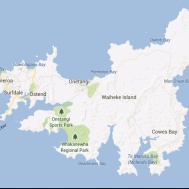 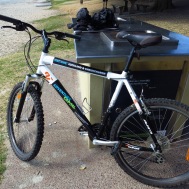 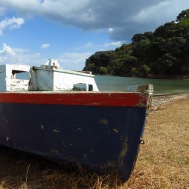 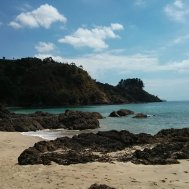 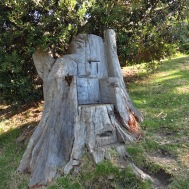 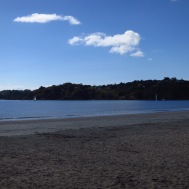 After relaxing for a bit at the family-friendly portion of Palm Beach I continued to punish my quads around the island on the bike. Somehow they’ve devised a way to make every road go uphill. I got a burger at a remote cafe, checked out a few beaches on the southern coast (thankfully none were au naturale) and browsed around some of the shops. Following ferry ride back to downtown Auckland I headed toward my temporary home along a very active wharf, which was full of impressive sailboats and expensive-looking restaurants catering to beautiful people.

All in all it was a good day and I arrived home sufficiently knackered.

12 thoughts on “Auckland: The City of Sails”