Well I made it to the the south island of New Zealand, but not without a few delays, a brief period of despair, and several hours with a van driver who loves Johnny Cash.

The day started off normal enough: 6:00am alarm, dress in the dark so as to avoid disturbing the five others in your luxurious 100 sq ft suite, slug 40 pounds on your back and 10 on your front, hike to a random street corner for a shuttle pickup. Routine. The goal was to get from Wellington (A) in the north to Picton (B) in the south, and the ferry is the best way to accomplish that.

I’ve been on ferries before but this one was the bees knees. It was practically a mini cruiseliner with 10 decks, a cinema, a bar with live music, and two decks just for cars and trucks. Unfortunately our 45-minute-late departure caused me to miss the one bus that runs daily from Picton to Nelson (C), my travel goal for the day. After getting my checked bag (yeah, I was surprised to check a bag on a ferry, too) I considered my options:

I decided to hike to the Picton city center so I could sit under a tree and weigh my options and along the way I came across an i-SITE center, which is kind of a hub for travel and booking information around the south island. A helpful lady inside informed me that sometimes a driver will stop in and ask if any stragglers need a lift and she suggested that I hang around until about 1:00pm. My new best friend Maurice arrived in his white van right on time.

Maurice is a fellow who I’d guess is in his 60s, a bit gruff, but talkative and likeable. Unlike the Stray bus drivers, who would invite passengers to play DJ with their iPods, Maurice supplied tunes from his personal CD collection out of what sounded like a single speaker in the dash. On more than one occasion we almost ran off the road at 100 kph as he fumbled through his folio. Based on what I heard, he’s a Johnny Cash, John Denver, Beach Boys kind of guy.

Maurice informed me that he was heading all the way down to Westport (D) so I gave him another $45 to get me there. We did pass through Nelson and it looked like a town I’d like to visit but Westport got me further down the coast and closer to my goal of Queenstown. Maurice and I chatted about all sorts of things, including a nice hostel called Bazil’s, and he graciously dropped me off right at the front door.

Westport is an old mining town with a population of about 5000. There isn’t much to do in the city itself as it’s more of a launch point for just about any outdoor activity you can think of. Today I borrowed a mountain bike from the hostel and rode to a hiking trail with incredible views at Cape Foulwind, overlooking the Tasman Sea. At one of the lookouts you can check out a colony of seals on the rocks below but spotting them was a bit like playing Where’s Waldo. How many can you count in the pic below? 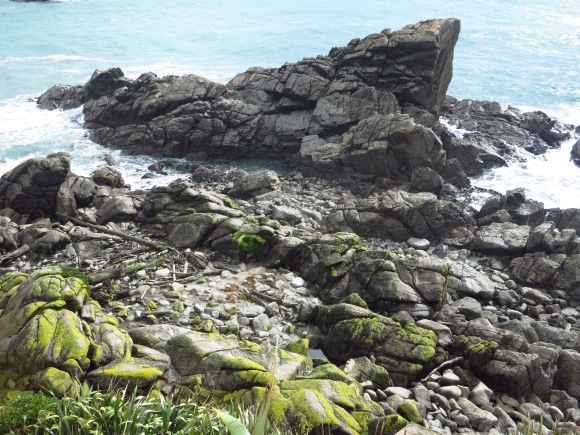